After a busy half term of preparation and rehearsals, Year 13 BTEC Performing Arts students presented their enactment of Lieutenant Kije in two shows on Wednesday 22nd October, before the break for half term.

Based on a Russian short story by Yuri Tyanov and with music by Prokofiev it is a satirical comedy about a man who does not exist.  This is the fourth time the college has staged this play, the first being in 1987, the second ten years later and the third ten years after that.  It has been a great favourite with students with many of the earlier casts sending their good wishes to the present company when they heard that Kije was back again.

It is the story of how a soldier is created by accident by a mistake on an official document.  A farce ensues when three other soldiers all pretend to be him.  Set in Russia in 1801 the story starts in the frozen wastes of Siberia and ends in the great city of St Petersburg in the Winter Palace at the court of the mad Tsar Paul 1st.

The performance was towards two of the students BTEC units: Rehearsing for Performance and Performing to an Audience. Both performances were great successes with the audiences being highly appreciative of the mad comedy and the rich caricatures created by the actors.  The play – which included original dances – was performed superbly on the stage in the Newman Theatre and gained the students high marks towards these units.

The group will now study Acting for Film and Television, before returning to live performance for their final musical theatre style showcase at the end of March 2015. 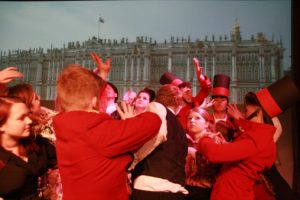