In an effort to show solidarity with Ukraine and raise money for much needed supplies for those affected, our Newman Active Team organised group walks with the aim of collectively walking the distance from College to the Ukrainian capital Kyiv.

Walk for Ukraine saw groups of staff and students join together, over the course of 4 weeks to take part in a 45-minute walk around the beautiful Avenham Park, which is located a short distance from the College.

The total distance the group aimed to cover was 1420 miles and all funds raised are being donated to CAFOD’s Ukraine Humanitarian Appeal. The final total is expected after Easter, so keep an eye on our social media channels to find out how much was raised.

This wasn’t the only activity in support of the crisis in Ukraine, as we also organised multiple collections to be sent directly to the refugees fleeing the war-torn country. Items such as clothing, blankets, nappies, and toiletries were collected, and the quantities were so vast we needed several van loads to transport it all. Students and staff formed a chain throughout the College grounds to pass all the donations from their collection point to the awaiting vehicles in an homage to our namesake John Henry Newman, who is quoted as saying “I am a link in a chain.”

As always we were very proud of the response of the Newman Community, pulling together to raise much needed funds and resources for those in great need. 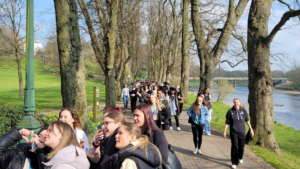