Officially the Top College in Lancashire!

The Government released its new-look league tables last week, which measure the performance of Schools and Colleges across the country.

Staff and students are celebrating as these latest tables put Cardinal Newman firmly at the top across the board.

Post 16 educational institutions are now assessed by five distinct measures; progress, attainment, retention, English and Maths as well as destinations. These new accountability headline measures aim to give a full picture of how Colleges are performing, taking account of a variety of factors.

The latest tables show that Cardinal Newman College is the best performing College in Lancashire based on A Level Point Score and for the percentage of students achieving AAB or higher in at least two facilitating subjects! We are also the top performing College in the area based on Value Added, beating other local providers Runshaw and Winstanley to the top spot. The combination of all of these achievements just goes to show that students not only achieve high grades, leaving Cardinal Newman with a great A Level point score, but that they make fantastic progress here too. Value Added has always been measure that we hold dear at Cardinal Newman, as it takes into account all students achievements and looks at the distance each student has travelled during their time at a College, by comparing their GCSE and A Level results to gauge the progress that they have made. We are proud to be consistently outstanding in this measure, regularly featuring amongst the top Colleges in the country on this basis.

But the success doesn’t end there, Cardinal Newman also compares well when looking at Vocational students’ progress, with the College outstripping local competitors in the average vocational point score to be the top College in Lancashire as well as leading the tables for Vocational Value Added.

We are extremely proud of all of the achievements shown by these measures, as it highlights that our students make the best progress, so no matter what grades a student arrives with, they will flourish at Cardinal Newman.

For more details and to see the league tables for the local area click here. 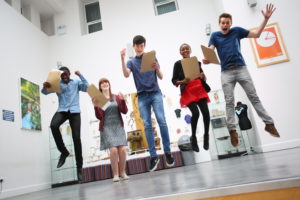