Newman student Farihaa Motala, has been selected as one of only 16 students from across the UK for a STEM Scholarship.

The Black Sea Marine Archaeology Project’s (MAP) education programme invited applications from students across the UK who met a range of criteria, including a teacher recommendation, studying a STEM related course, with plans to continue this study at University. Applications had to include a personal statement, providing evidence that they possess the relevant skills to undertake the project and an explanation of how they would benefit from taking part in the expedition, as well as a written piece of relevant research. Farihaa was then shortlisted as one of just 12 applicants from Lancashire who were then invited to attend a selection day. This included an interview, presentation and activities, as well as the opportunity to learn more about the project.

The Black Sea is considered to be one of the world’s finest underwater laboratories, due to the anoxic layer, which preserves artefacts better than in any other marine environment.

The project is the first of its scale to be attempted in the Bulgarian waters of the Black Sea and will utilise maritime archaeology and marine geophysics to record, date and understand the submerged cultural heritage of Bulgaria and aims to contribute to the knowledge of prehistoric and historic environmental record of human activity in the region.

Farihaa took part in a four-day training exercise in Southampton, which included some time to get to know the other scholars who were taking part in the expedition. The first full day was spent at the National Oceanography Centre, where they were able to go on board a research vessel and travel on the Solent (which is the strait that separates the Isle of Wight from mainland England). They looked at how to gather data and what the off shore placement experience would be like. They were also able to meet with people who work and produce remote operated vehicles which are used to scan the sea bed and had a go and driving them. The training ended with a presentation by the scholars to their parents of what they had done during the course.

Farihaa will be part of the onshore research project, which will take place during the summer holidays! Good luck Farihaa and enjoy the experience! 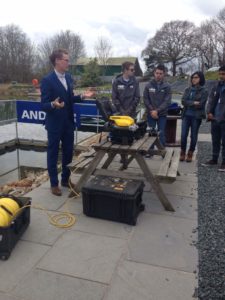