A Newman student has made the national news after his local mission to spread a little joy caught the eye of a BBC reporter.

Joe Gaughan, who studies Business Studies, Statistics and Computer Science, at Cardinal Newman, was inspired by seeing pictures of rainbows that the children in his street had drawn and put up in their windows and wanted to do something to help unite the community and keep people feeling strong during the lock-down.

Joe popped notes through the doors of his neighbours, asking them to make vibrant garden displays which he could film from above with his drone. The footage, which has since appeared on the BBC News at 6 shows the residents of Abbot Meadow waving, alongside colourful displays and messages which they had created in their Gardens on Wednesday 25th March.

The garden messages included one from a retired midwife, praising the NHS, alongside other messages of support and community spirit.

Joe then posted the footage to his YouTube channel, where he shares videos of his travels after investing in some video and editing equipment so he could pursue his hobby.

Joe has had a great response from his neighbours, with many posting thank you notes through his door and he has also received some lovely feedback online from his YouTube channel.

Well done Joe, it is great to see the Newman community spirit thriving even while you can’t be with us in person! 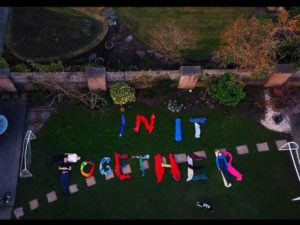