Aspiring screenwriter Dominic Merrick has moved from the lecture theatres of Preston to the cobbles of Coronation Street. 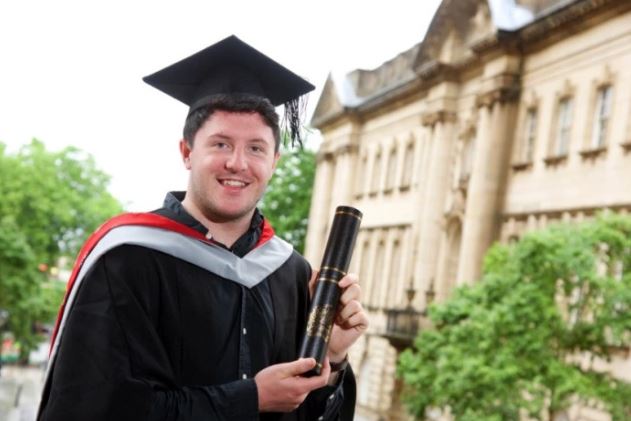 The Cardinal Newman alumni has just graduated from the University of Lancashire with a first class degree and landed himself a role at one of the most popular soaps on TV.

Dominic, now 21, has been hand picked for a seven-week work placement as a screenwriter on Coronation Street, after impressing one of the soap’s bosses during a project delivered by UCLan in partnership with ITV Studios, along with co-writer Chris Taylor. He got the chance to take part in UCLan’s Soap in a Week project, which saw 90 undergraduate students work alongside 50 ITV cast and crew members to write, produce, act and direct a 15 minute drama.

The pair impressed Mark Bickerton, the head of Editorial Engagement for ITV Continuing Drama so much, that he personally offered them the work placement in Salford’s Media City.

Dominic, who attended Penwortham Priory Academy, has also written a short story, in between studying for his Screenwriting for Film, TV, Radio and Games degree.

This story called, The Wars of the Sun and the Moon has now been published and named runner-up in a regional competition by Carnegie medal-winning author Melvin Burgess.

Dominic said: “I’ve always been interested in creative writing generally and it’s something that’s always come naturally to me.”

“Screenwriting is a completely different skill, though, one I wasn’t as familiar with. Because it’s such a specific discipline I felt it was something I could develop much more at degree level.”

He added: “I’ve really enjoyed the course and the Soap in a Week project in particular was amazing.”

“The whole experience was a real eye-opener and a great way to get noticed by people in the industry.”

Dominic continued: “Gaming is the field I’d most like to work in. I really like the complete freedom involved, you could be designing a new world or creating monsters. The gaming industry is on the rise and games are now like films in their own right, but with the player in control of the story.

“The industry is going to keep on growing because technology keeps progressing, and because things are moving so fast it’s less of a strict art form.”

His next step after his work placement at Coronation Street is to do a Masters degree.