National Call up for Dante

Newman student Dante Taylor recently received a call-up to play in the Ran Sevens Tournament for his home nation of Turks and Caicos.

Dante, who relocated to Preston just two years ago, studies BTEC Sport at Cardinal Newman and has been playing rugby for six years, after starting with tag rugby with his school in Turks and Caicos. When he moved to Preston, he began training with the Preston Grasshoppers and has spent the last 12 months playing in his first full year of full-contact rugby.

He was contacted by the coaches for the Turks and Caicos Team who then paid for him to travel back to train and take part in the tournament at the end of April. The tournament ran from the 23rd – the 24th of April in the Bahamas and saw Dante’s team take on the likes of Barbados, Mexico, Belize, Guyana, Jamaica and more.

Dante said: “I opened the second day with two tries against Belize, which was a fantastic feeling. The tournament has introduced me to rugby sevens and if the time comes for me to play it again, I would love to gain even more experience and contribute to the success of Turks and Caicos.”

Huge congratulations to Dante on being selected and taking part! 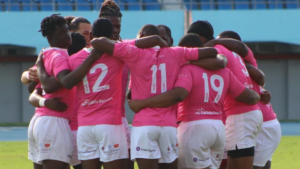