A group of students from the Foundation Learning Department at Cardinal Newman have completed their Duke of Edinburgh Awards, with 10 completing the Bronze and five completing the silver award.

The group camped over-night in gale force winds and torrential rain, but that didn’t dampen their spirits or stop them from singing and enjoying the whole experience! The Silver Award students who completed the full Guild Wheel walk, took 74,947 steps, walking a total of 21 miles throughout the course of the expedition.

The expedition came as the final part of a long process of hard work and commitment by the students, who also had to complete many other tasks and challenges, including the skills component, which involved them learning a new skill. The skills learned ranged from painting to chess, playing the piano to Jewellery making and French to DIY!

They also had to complete some voluntary work, with examples of this including working in charity shops, helping out with pensioners parties here at College, internships at the Royal Preston Hospital and much more. In preparation for the final expedition the group were also completed a three-month fitness unit, which saw them take part in wellness lessons consisting of fitness testing, Boxfit, aerobics, boot camps and circuit training!

Brett Longstaff, Teacher of Foundation Learning said: “We are so incredibly proud of all of the students who took part in this challenge for their effort and the teamwork and positivity that they showed, especially considering the conditions that they had to put up with for the final expedition!”

The group also managed to raise £305 for Save the Children, which has enabled them to sponsor a child from Urumqi in far western China. The sponsorship money will help in providing food and education for the sponsor child, as well as expanding our own students’ knowledge of the world through their correspondence with them. 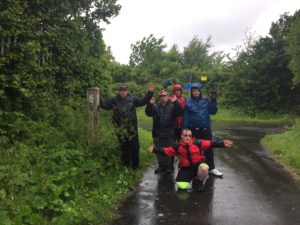