Former Student Takes on the London Marathon for Charity

Former Cardinal Newman student, Corin Heney, who studied at the College between 2007-2009, will be taking part in the London Marathon this year to raise money for International Service, the charity that she now works for.

Despite never having run further than 5K, Corin has set about training for the world famous marathon, so that she can help to further support the great work that the charity do. International Service supports women, children and young people as well as people with disabilities, to enable them to access basic rights.

The charity works to support people like David Achuroa, from Sandema in northern Ghana. Like many disabled children in developing countries, David was stopped from going to school. His family kept him in the house, ashamed of his disability.

Working with International Service partner organisation, CBR Life, David was finally able to access an education and his community. David became the first member of his family to graduate from university, and now has a full scholarship to study in Canada.

Corin, who studied A Levels in English Literature, Early Modern History and Religious Studies, says her own experiences at Cardinal Newman inspired her to run: “The thing I always remember about Cardinal Newman is being encouraged to reach my potential. The idea that someone like David wouldn’t have that, just because of his disability, that just seemed unfair to me.”

She says: “I know from working with International Service that our work is making a real difference. That’s what keeps me going when training is tough.”

Training over the winter has been especially challenging, but Corin is staying optimistic: “Of course the training is challenging. But once you’ve run around Avenham Park several times in the middle of December, you’re ready for anything!” 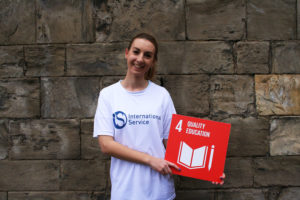