The film, which stars iconic British actors, including Bill Nighy, Jenny Agutter and Tim McInnerny, has just wrapped, following three months of filming for Ella-Grace, who has been working on the film since September.

Ella was invited to audition with other girls from around the country, and when she got down to the final two, she found that she had great chemistry with the other characters, which she thinks helped to win her the part.

But this isn’t Ella’s first taste of fame as she has been acting in numerous roles since the age of 13, when she played Grace Piper in Coronation Street for a period of three months from September – November 2013. She has also done some presenting for children’s TV channel CITV and acted in a Sky One crime drama ‘The Five’ in 2016. She has also featured alongside her whole family in one of Iceland’s recent TV adverts promoting their home delivery service.

The movie, ‘Triple Word Score’ is a supernatural comedy-drama following the story of a father, played by Bill Nighy, searching for his missing son. Filming took place across the North West, including Liverpool and West Lancashire and was written by Frank Cottrell Boyce, who was responsible for other hit films 24 Hour Party People and Hilary & Jackie.

We think this is just the start of big things for Ella, so watch this space! 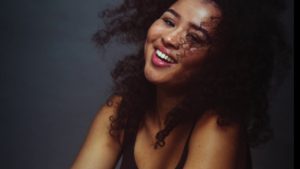