It is fair to say that it has been an unusual year and we haven’t finished the academic year in the way that we would have imagined, but we don’t want the current situation to over shadow or diminish the achievements of our Year 13 students.

We are taking the time to celebrate the achievements of our A-Level and BTEC students, who have worked so hard over the past two years.

There couldn’t be a better time to celebrate the individual successes of our students, from those who have secured highly sought after places at prestigious universities, to those who have gained impressive higher level apprenticeships at top UK companies, they are proof that nothing can get in the way of our students success!

Some particular success stories include students who have secured some of the most highly sought after and competitive apprenticeship schemes in the local area.

Oliver Atkinson, who attended Garstang Academy, has secured himself a place at BAE on a degree apprenticeship programme, which allows him to train in Project Management, whilst also earning himself a degree. Oliver decided to apply for an apprenticeship as he felt university wasn’t for him. He went through the rigorous selection process and was finally selected as one of about 700/800 candidates out of approximately 9,000 applicants!

Oliver studied BTEC Applied Science, A-Level Psychology and Politics at Cardinal Newman, achieving a fantastic DS*AA. He will start at BAE in January, as they have staggered the start dates for Apprentices this year due to the COVID outbreak, and he plans to continue with his part-time job until then.

Oliver said: “I am really looking forward to starting at BAE, I feel like I will really enjoy the more rounded experience that this type of programme will offer me.”

The College has also had another great year of success for Medicine, Dentistry and Vet Science applicants, with students securing places on the highly sought-after degree courses. Twins Nandhan and Navarasan Pradeesh, who attended Archbishop Temple High School, are just two of the success stories. They both studied Biology, Chemistry and Maths and EPQ, Navarasan achieved A*A*A*A* and Nandhan achieved A*AAA which has secured their places at the University of Manchester to study Medicine.

On starting at the College, they both decided to join the Med Soc, which is a programme specifically designed for students with aspirations of attending University to study either Dentistry, Vet Science or Medicine and also took part in the Preston Widening Access Programme (PWAP), which is aimed at encouraging students from the Preston area to study Medicine. Nandhan said: “I have found the Med Soc really helpful, especially with the application process and preparing us, as well as how to ensure that our applications caught the attention of the admissions tutors.”

Navarasan added: “I found the PWAP programme really useful as it gave me a real insight into the medical field. It helped to understand the variety in the careers within medicine and the procedures. I felt like it gave me a really good foundation to make the best possible application.”

Other success comes in the form of Catherine Vernum, who studied Maths, Further Maths, Computing and Ethics Philosophy & Religion achieved an outstanding A*A*A*A. Catherine is now also heading to the University of Manchester to study Computer Science, with aspirations of a career in games development. Catherine says: “I found the environment at Newman always felt comfortable and like a nice place to study. I am really looking forward to the new experiences that university will provide and pursuing my career in Games Development.”

As a College we have also had great successes with our Oxford and Cambridge applications, which are supported each year by the HE* Programme and the HE+ Scheme, which is run in conjunction with Cambridge University. One such student is Ffion Fox, who after studying A-Levels in English Combined, Law and Early Modern History and achieving A*AA is taking up her place to study Law at Oxford. Ffion, who joined Newman from Darwen Vale Academy said: “It was a hard process, applying for Oxford. I had to take the LMAT test first, which I don’t think I did very well in and then was called for an interview.” The admissions tutors at Oxford were obviously impressed as she will be taking up her place at Oxford this Autumn.

Further success for our Oxbridge applicants comes from Caitlin Whittaker. Caitlin, from Holy Cross in Chorley, who studied English Language, English Literature and Ethics Philosophy and Religion achieving AAA, has now secured her place at Oxford to study English. Caitlin said: “I always had aspirations of applying to Oxbridge, but once I was able to visit, I really liked Oxford and felt that it suited me better. I have been part of the HE* Programme at Newman which has also helped me with the process, from Mock Interview practise and all the advice and support of teachers too.”

One student who has her sights set on helping others and forging change in her future is Holly Brown. Holly attended Lytham St Anne’s High, before joining Newman, where she studied Maths, Further Maths, Geography, Economics and an EPQ achieving an amazing A*A*A*A*A. Holly is now heading off to Glasgow to study Economics. She chose Glasgow as she liked the course, particularly as it focused on developmental economics and working with aid organisations. She said: “In the future I hope to work for an aid organisation or an intergovernmental organisation in the future, so I think that this course is perfect for me. It has been hard work doing so many subjects, but the teachers have been amazing and so supportive.”

Another student who has her eyes on her goal career is Paulina Gwozdz from Corpus Christi. Paulina studied BTEC Diploma in Health & Social Care alongside a Subsidiary Diploma in Children’s Play and Development achieving D*D*DS and is now heading off to UCLan to study Occupational Therapy, before planning to go straight into a career as an Occupational Therapist. She said: “My teachers have all been really lovely and helpful during my time at College. They really encouraged me and are part of the reason I decided to go into Occupational Therapy.”

In the more creative subjects we’ve also seen some remarkable successes. For example, Harvey Brittain, who had a single out earlier in the year called “It’s My Paris”, has also managed to secure himself a Scholarship to study at the Berklee College of Music in Boston USA, where he plans to major in Music Performance. Harvey, who studied Music Performance, Music Production and A-Level German at Newman and achieved DS*DS*A*, said: “It is an exciting opportunity to be able to study at such a prestigious Music College in the US. It is a College that is geared towards supporting students with aspirations of succeeding in the Music industry, so it is perfect for me. I plan to also carry on my performing whilst I study and will hopefully move over to the US in January, as the first semester will be delivered online. I am really excited for this new opportunity.”

Another example is Cynthia Yang, formerly of Lancaster Girls’ Grammar, who after achieving a fantastic D*D*D*A*A in her BTEC Extended Diploma in Art & Design, A-Level Maths and an EPQ, is heading off to Edinburgh to study Jewellery and Silversmithing.

During lockdown Cynthia has been keeping her creativity going by doing some illustrations and sharing this on her Instagram account. She said: “I wanted to keep my skills and creativity going as I feel that my course at university is going to have lots of sketching involved.”

Annelise Davies, joined Newman from St Bede’s Ormskirk as she felt that the atmosphere at Newman was welcoming and friendly and the subject content seemed really interesting. Now she is celebrating, having achieved A*A*A* and is now choosing between top Universities Durham and Liverpool, to study English. Annelise, who studied English Language, English Literature and Ethics, Philosophy & Religion, said: “I am quite torn between the two universities. They are both such great institutions and cities, I know I am in a fortunate position to have this choice to make as either would be a fantastic option!” 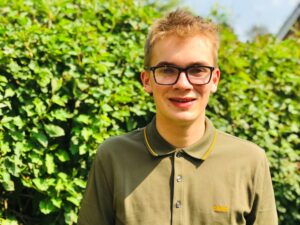