Last Friday Cardinal Newman really got involved in the Show Racism the Red Card #WearRedDay in a big way. Staff and students alike took part, organising a host of events from Newman Active games such as table tennis and giant Jenga to a raffle with Preston North End prizes and an auction where staff and students could secretly bid for a signed Gylfi Sigurdsson photo gifted by Everton FC.

We also had a pledge wall, where staff and students were able to make a pledge to do their part to combat racism, with winning pledges awarded passes for Energi Trampoline Park in Preston. Some of the winning pledges included: “Never lose sight of the fact that we all belong to the Human Race”, “Educate myself on the religious dress, values and customs of my fellow students so I am not ignorant” and “As a teacher I can empower people with accurate information and knowledge enabling them to tackle racism and challenge racist attitudes.”

We were also lucky enough to have a representative from the charity Show Racism the Red Card delivering lectures and workshops throughout the day to our students. All in all the activities throughout the day raised £507.70 – well done to all involved! We are proud as College to be showing racism the red card! 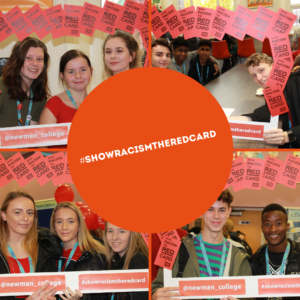