It has been a busy start to the term for our language students at Cardinal Newman! German and Religious Studies students kicked off the New Year with a trip to Berlin, where they spent a very busy four days touring the top tourist sights the German capital has to offer.

As part of the whistle-stop tour, the group visited a communist secret police station, a concentration camp, the Berlin Wall remains, as well as a variety of museums which focussed on the Cold War and the Nazi regime.

The A Level German students were able to interview three German people who had lived under communist rule and talk about the impact that the fall of the Berlin Wall had on them. This gave them lots of opportunities to practice their language skills and learn a lot about the history of the country.

The term has also seen us welcome a group of French Exchange students from Bourg-Lès- Valence in the South of France near to Grenoble. The group arrived and spent the weekend with their exchange partners, before starting the week with a day at College, experiencing a day in the life of a Newman student. The rest of the week will be spent visiting some of the North West’s greatest tourist destinations.

We have also welcomed 15 students from Germany for a three-day visit to the UK. The students spent time at College before visiting the Lake District and the Museum of Science and Industry in Manchester. 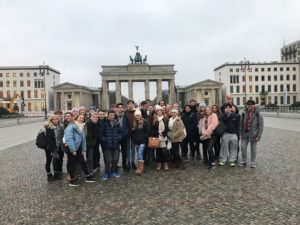