Abby joined Cardinal Newman in 2014 from Bishop Rawstorne. After completing her A-Levels she headed off to the University of York to study Social and Political Sciences.

When she graduated, Abby secured a job as the Media and Communications Officer of the youth wing of the People’s Vote Campaign, working right next to the Houses of Parliament. Abby said “It was one of the most exciting times to work in politics, with Theresa May’s deadlocked government, and I loved every minute of it. Before the 2019 election, I left to work as a General Election Organiser for HOPE not hate, campaigning against Nigel Farage and the Brexit Party in key seats. Then, I worked for a Westminster based communications firm as their Digital Strategy and Campaigns Lead.”

Currently Abby works as the Digital Content Manager for the Labour Party, managing the content that goes out on the Labour Party’s social media channels and website. She works alongside the leadership team, MPs, the Shadow Cabinet, and many others. The job entails thinking about how to creatively present policies and ideas to voters through social media – which is a hugely important campaigning tool for any political party now.

Abby has long wanted to work within politics, since her days at Newman and has worked around digital campaigning and politics since the start of her professional career, kickstarted by the social media campaign she started while at Newman, that went viral in the 2015 election. She has had the opportunity to work at the heart of British politics and for almost all the roles she has held since her time at Newman she has been contacted through social media by the person who then ended up employing her.

Talking about her time at Newman, Abby said: “I loved my time at Newman, it was totally different in the best possible way. You were treated like an adult, like you mattered, and like the teachers really cared how you did. The teachers were all so supportive and I felt like a lot of them really helped to shape who I am and where I am today. Bernadette, who taught me Ancient History, was so passionate and knowledgeable about the subject it made me excited to study it. Charlotte, who taught me Religious Studies, made me feel like my opinion mattered and always helped me to share it. And I never thought I would enjoy the compulsory RE lesson, but I loved that too, it became a highlight of my week. I would talk to Barbara about politics and she was so supportive she once played an interview I had done with Jeremy Corbyn in front of the whole class.  And Nick was exactly what a headteacher should be. They were proud of me, and that meant a lot. I have never felt so supported and so rooted for like I did from all the staff there. I think that’s what I remember the most about Newman – the people and how they always believed in you, I’ll never forget them and I’ll never forget that.

“I couldn’t be more grateful for my time at Newman, it was there where my life and career path literally changed in the course of a day when something I was talking about on social media went viral.  I got given amazing opportunities to write for national newspapers and speak on political TV shows, and all that led to the exact job I have today, which was my dream job for years. It’s strange to think about – in 2015, at Newman, I started a social media campaign in support of the Labour Party, and now 7 years later I manage the Labour Party’s social media and more. I don’t think I could have got here without the support system at Newman, but also everything I learned about the subjects I studied, and everything I learned about myself there too.” 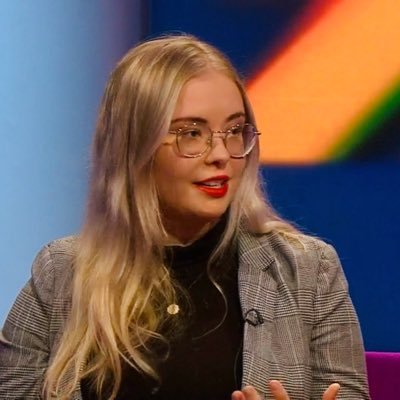