40 students from the RE Department went on the trip of a lifetime to Rome for a five day tour of the city that the Pope calls home.

With such a lot to see it was a busy few days, which saw them take in the most famous of Rome’s tourist attractions. When they first arrived, the group split into two, with half enjoying a trip to the Trevi Fountain, whilst the rest experienced “The Time Elevator” which is a cinematic explanation of Roman History.

Day two started with a stroll down the Bocca de Verita – “The Mouth of Truth” followed by a trip across the bridge to Trastevere. The group then ambled through the city on their way to the 2000 year old Pantheon before heading back to the Trevi Fountain and the Spanish Steps.

A trip to Rome would not be complete without visiting the world’s smallest state – The Vatican. The group took in all the wondrous sights and sounds that the Vatican had to offer, including the Basilica, the Sistine Chapel, the Vatican museums and had time to pay their respects to the Popes past, when visiting their tombs.

Their final full day in Rome was spent visiting one of the city’s most famous landmarks, the Colosseum. From there, the students heading through the forum to the city centre, taking in the grave of Julius Caesar, the Old Senate House and the temple of the Vestal Virgins on their way.

Finally the students got some free time to explore the shops before heading back to the hotel for their final night in Rome, before heading home in the morning.

To read more about the RE Department’s trip, why not take a look at the blog here. 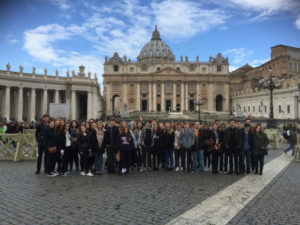