A Union of Winners

Students at Cardinal Newman are celebrating, after our Students’ Union were awarded the Green Impact Student Union of the Year 2014-15 at the annual NUS Awards.

Students’ Union Co-Ordinator, Amy Fleetwood said: “We are so proud of our Students for winning this award. It is an outstanding achievement and testament to the hard work that last years’ Union put into it.”

Holly Canham, (All Hallows) from the Students Union was accompanied by Hayley Waterworth, Estates Officer and Amy Fleetwood, Achievement Tutor and Student Union Co-Ordinator at the annual NUS Awards at the Macron Stadium in Bolton. 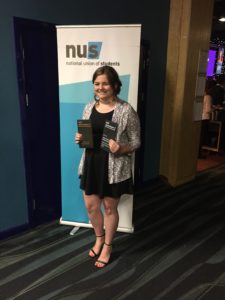