Four students from Cardinal Newman College have won a challenge set by GCHQ as part of the Manchester Science Festival.

Hack Manchester organise coding competitions based in Manchester at the Museum of Science and Industry. Teams of up to four people can compete and our students took part in the Junior Challenge on 24th – 25th October.

The challenge which they took part in was created by GCHQ (Government Communications Headquarters), who work with MI5 and the rest of the security services, towards protecting the UK from the threat of cyber-attacks, terrorism, serious organised crime, espionage, as well as supporting military operations.

Historically, steganography has been something intelligence agencies have used to send secret messages – from invisible ink, to microdots, to electronic data, but it is also used by serious criminals to disguise their communications. GCHQ works to identify and investigate such communications, so the challenge aimed to test their ability to spot these methods.

The group of Cardinal Newman students, were asked to develop an innovative online steganography tool, which was able to conceal data, with the capability to publish it online so it doesn’t look out of the ordinary, and then be able to reveal the data if you know what to look out for.

Not only did the team, who all study Computing A Level at Cardinal Newman, win their challenge, but they were also named as the runners up for the best in show for their steganography tool.

Congratulations to them all! 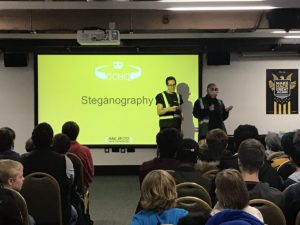