Student Trend: The rise of #Milifandom

Last week Labour leader Ed Miliband saw a dramatic rise in support from an unexpected source, thanks to a new twitter hashtag #milifandom.

The hashtag, which was trending on twitter all over the world, was started by a student from Cardinal Newman College, Abby. Abby was frustrated by the “distorted media portrayal of the Labour leader” and the fact that, at 17, she is unable to have her say in the forthcoming General Election.

The hashtag milifandom has created a platform for herself and other young people to have their voices heard about the future of their country. Abby states that she doesn’t feel that David Cameron and the current government are listening to young people, tweeting: “David Cameron doesn’t think I deserve the vote because I’m 17. I started #milifandom campaign to show how powerful young people are.”

Abby, who is studying A Levels in Ancient History, English Literature, Modern History, Religious Studies and Critical Thinking, now has over 18,000 followers on twitter and has even been in touch with Ed himself!
Abby’s work, campaigning for the Labour party and Ed Miliband himself are being credited with a shift in the public’s perception of him and possibly changing the face of the General Election.

Principal Nick Burnham said: “Cardinal Newman College is incredibly proud of Abby and her campaign. As she has already demonstrated, she is an intelligent, caring and strong young woman who represents a huge number of talented and socially aware young people, who feel disenfranchised by the political system and disillusioned by media standards. Her message that we should vote for policies not personalities is a positive one, we are pleased that her campaign has united young people and got people talking about what really matters.” 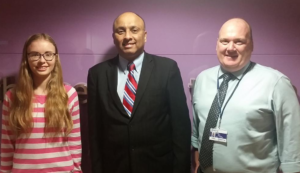