Off to the Special Olympics

Newman student David Corr, who is part of the Foundation Learning programme at the College, has been selected to represent Great Britain in the Winter Special Olympics in Austria next year.

David attended trials earlier this year in the French Alps, and was one of only 11 skiers selected to represent Team GB. There will be 3000 athletes, representing 110 nations and competing in eight different disciplines. David will be racing in the Giant Slalom and Slalom events in Schladming, Austria in March 2017.

David has been skiing from a very young age, having taken it up at just 5 years old! Influenced by his older brother Chris, who is also a skier, David wanted to give it a try – and has never looked back!

David trains regularly on the dry slopes at Pendle Ski club and is part of Rossendale Special Ski Club, which teaches people with intellectual difficulties how to ski, as well as entering competitions that see him travelling all over the country, and indeed the world!

David’s latest competition was in Aldershot at the weekend, where he raced on the dry slopes as part of the UK titles. It proved to be another successful outing, as David came in second in his category! Well done David!! 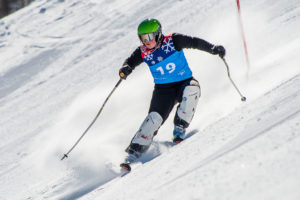