If you were lucky enough to have tickets for ‘Little Women’ at Preston Playhouse over the Easter break, you would have caught not one but seven Musical Theatre students from Newman in this fabulous production.

Based on the timeless classic of the same name by Louisa May Alcott, Create Theatre Academy staged an exciting and innovative musical adaptation from 14th – 16th April.

After attending open auditions at Create Theatre Academy on 1st February, seven students from our Musical Theatre BTEC were successful in gaining parts in the production, alongside a cast of industry professionals. Megan Price, Jena Darley, Alice Croasdale, Mary Cait O’Neil, Grace Gilbert, Ella Speakman and former student Matilda Taylor were all successful and then took part in an intense 8-week long rehearsal to prepare for the production. The rehearsals included vocal tuition, choreography and acting to really bring this classic tale to life. Telling the story of sister’s Jo, Meg, Beth and Amy March, the Preston Playhouse performance was nothing short of West End quality.

Congratulations to all involved and watch out for these names in the future, they are certainly rising stars and ones to watch. 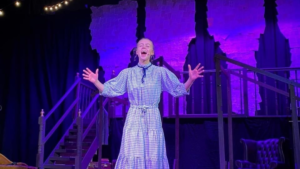