Up and coming Preston band, The Empire Police are making waves in the local music scene after being featured on BBC Radio Lancashire.

After just one rehearsal together, the group felt that they had something and went on to write and record their first demo in the College’s recording studios. When talking with the group live on BBC Radio Lancashire, host Sean McGinty said: “So many people that have made really great music have come through Cardinal Newman, some people who are signed to major labels now, [so] they must be doing something [right]!”

The band’s lead guitarist, Tom Hale, who studied both Music and Music Technology at Newman said: “We loved [Music at Newman]. The tuition is incredible and the teachers always push you to do your best and work hard.” Now studying at The Royal Northern College of Music, Tom has very fond memories of their time at College, giving a live on-air ‘shout out’ to Music Teacher James Cruickshanks.

The group have got a busy few weeks ahead, with gigs scheduled around the North of England, including a slot supporting Inheaven at LiVe in Preston’s Guildhall on 25th February and at Maida Vale in Sheffield on 24th March. The upcoming gigs are a great way for the band to promote their debut EP, which includes tracks such as “Taxi Rank”, “Out of Nowhere” and “Stop the Clocks” and is available now on Spotify and iTunes. 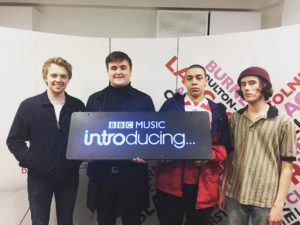