A new network has been set up in the region to promote all things German. The North West German Network held a competition for schools and Colleges and a number of our students did exceptionally well.

Second Prize was awarded to, Jan-Kay Cheung (Holy Cross) on scientists and musicians in Manchester.

The following students have been given Honourable mentions for their entries by the Network:

The networks launch is taking place at the Manchester Central Library in St Peter’s Square on Tuesday 10th March, starting at 4.30pm.

As well as Cardinal Newman College, a number of other educational establishments are getting involved including Lancaster, Liverpool and Manchester Universities. In addition there will also be guests such as the Honorary Consul to the Federal Republic of Germany, Mark Green, and representatives from the German Embassy in London and the British Council.

The launch will start with speeches and prize-giving for an inaugural writing and design competition, ‘What is German in the North West?’ which has received entries from students across the region.

Nine- to eighteen-year-olds have been taking part in the competition, which has been co-ordinated by the North West German Network to increase their knowledge of the links between Germany and the region.

They have been asked to design posters, write poems and newspaper articles, produce short films, create songs and design games.

The College is very proud of the student’s achievements and Principal, Nick Burnham will be at the launch event to be a part of the panel looking at, What is German in the Northwest! 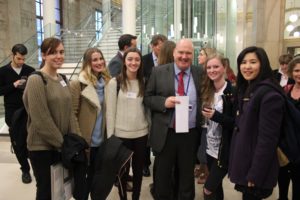