17 students from Cardinal Newman College were given the opportunity to quiz one of the world’s most influential scientists at the University of Cambridge in September.

Professor Sir John Walker, a Fellow of Sidney Sussex College, won the Nobel Prize in Chemistry in 1997 for studying how a spinning enzyme creates the molecule that powers cells in muscles. Professor Walker studied at Oxford University but joined the University of Cambridge in 1974 and is currently a group leader at the MRC Mitochondrial Biology Unit which conducts pioneering research into human diseases.

Professor Walker volunteered to speak as part of the University of Cambridge’s HE+ project. Cardinal Newman is one of Cambridge University’s fifteen HE+ Institutions, which aims to engage the best students in a sustained year-long programme, which includes academic extension classes, subject masterclasses, information and guidance session and visits to the University.

HE+ is designed to stretch and inspire the UK’s most academically-able students, encouraging and preparing them to make competitive applications to top universities.

Co-hosted by two Colleges at Cambridge, Sidney Sussex and St John’s, the group were part of a larger cohort of 62 students from Cardinal Newman who enjoyed a two day residential trip speaking to lecturers, admissions tutors and students about the subjects which they are considering studying at university.

After the event, Dan Taylor, Director of Gifted & Talented Students at Cardinal Newman College, and HE+ co-ordinator for Lancashire, said: “The students were very honoured to have such a famous scientist launch their HE+ visit to Cambridge and felt deeply encouraged that someone from such an ordinary background could reach such extraordinary heights. I really believe the HE+ scheme equips students with the skills and self-belief to aspire to greatness and apply to our most prestigious academic institutions.” 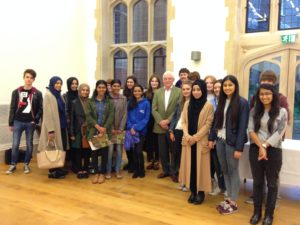