Newman student, Isaac Towers, has been selected to represent Great Britain in the IPC Athletics World Championships in Doha in October.

The 2015 IPC Athletics World Championships, will be one of the last major competitions ahead of the Rio 2016 Paralympic Games.

Being held between 21-31 October, the competition will feature around 1,300 athletes from 90 countries and will take place in the 12,000 capacity Qatar Sports Club’s – Suhaim Bin Hamam stadium.

Isaac, who is studying BTEC Business studies at Cardinal Newman, started racing at aged 11 after being introduced to the sport by Tanni Grey-Thompson’s husband and developing a real passion for it. At the IPC Athletics, Isaac will be competing in the 200m, 400m and 800m and is ranked as 7th for 800m. Isaac’s ultimate goal is to secure a place at the Paralympics in Rio 2016, after competing in the European Championships again next year.

Paralympic Head Coach, Paula Dunn said: “It’s a really exciting team heading out to Doha for the IPC Athletics World Championships. We’ve got a real mix of athletes who have won medals on the global stage as well as a number of new faces, which is really encouraging looking ahead to the future.

“Doha is a stepping stone for many of the athletes on their respective journeys to Rio, London 2017 and Tokyo 2020. I know the team will leave no stone unturned to deliver the sort of performances that we witnessed in Lyon two years ago.” 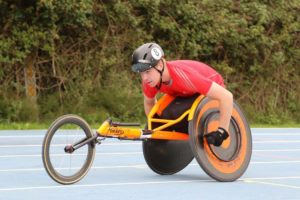