The Year 10 Maths Feast is an enjoyable and challenging team competition testing mathematical, team-working and communication skills. Each team consists of four Year 10 students working together on a set of problems. These problems include both recreational mathematics and some of a more traditional nature. There are five rounds and certificates were awarded for best teamwork and the winning team of each round as well as for the overall winner.

The FMSP organise approximately 70 events take place across England during February and March, which aim to support and promote the study of Maths and Further Maths at A Level.

Well done to all involved, a fantastic day was had by everyone who attended! 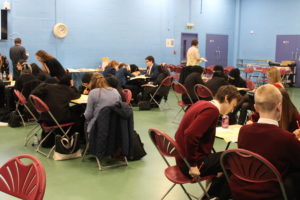