Cardinal Newman student Millie Hine will be jetting off to New York after being shortlisted for the All-American High School Film Festival – the biggest student film festival in the world!

Millie who has just started her second year of study at Cardinal Newman, studying Maths, English Literature and Modern History, entered her film ‘The Snake and the Apple’ after it had already won ‘Best Short Screenplay’ at UPIKE Film & Media Arts Festival in Kentucky, USA.

The film was also selected to feature in the LiftOff First Time Filmmaker Session based at Pinewood Studios. Now, Millie, along with one of the actresses from the film are heading to America on 20th October, for the film festival where the film will be screened at the AMC Empire 25 Theatre in Times Square, New York – the busiest movie theatre in the world.

Millie spent her Christmas holidays last year filming along with six other Cardinal Newman students, based on a short screenplay she had written herself. With the help of the Media Department at College providing necessary equipment and putting her in touch with the rest of her film crew. 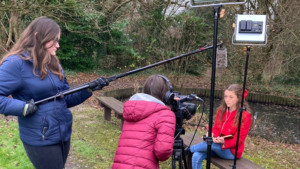