As usual it was a packed house, with students and staff from across College filling the chapel for a wonderful multi-lingual festive sing-along.

The service started with a prayer (in English!) read by Principal Nick Burnham, followed by a variety of traditional carols from Germany, Spain and France. Students also gave readings in each of the represented languages, wowing the audience with their linguistic ability.

The service finished with renditions of ‘Silent Night’ and ‘We Wish You a Merry Christmas’, with each verse sung in a different language!

Lead by the College band, the festive sounds filled the chapel and the main College building, putting everyone in the Christmas spirit. 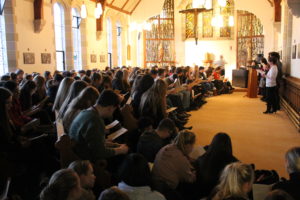