Not only is Newman student Abby Tomlinson making waves in the world of Politics, following her rise to fame through Milifandom, but she has also managed to secure herself an offer of a place at Cambridge University!

Abby, 17, formerly of Bishop Rawstorne, is hoping to study Human, Social and Political Science at Newnham College, Cambridge when she finishes her A Levels.

Abby rose to fame during last years’ General election, when her #Milifandom became a national news item, and has since gone on to become a respected political activist, blogging and writing for national newspapers including the Guardian.

When asked about her current extra curricula activities, Abby said: “I am not up to much at the moment, as I am focusing on my studies. I am just standing for election as the Under 19s Officer in the Young Labour National Committee.”

This post will see Abby representing under 19s interests and rights on a national level for the Labour Party, something that she has actively campaigned for over the last 12 months.

Despite all her many activities outside of the classroom, Abby has still found time to really focus on her studies and her application to University. As a Cambridge applicant, there is a lot of work to do before you are even considered for a place. Abby has been part of the HE* Programme at Cardinal Newman, which aims to support high achieving students in their aspirations. As part of this, Abby was able to access things such as mock interviews and even a visit to Cambridge University. After submitting her initial application, Abby then had to get through two interviews and a written test, before receiving a conditional offer of a place at the prestigious university.

When she has finished studying, Abby hopes to pursue a career either working for a charity or in Politics, either as a researcher or a speech writer. Abby said: “People often ask if I would like to stand for election myself one day, but I am not sure. I think I would prefer to campaign and work for change behind the scenes.”

Principal Nick Burnham says: “As a College we are massively proud of all of Abby’s achievements, both inside and outside of the classroom. She is a real role model for young people and proves that hard work and determination can achieve an awful lot! Well done Abby, keep up the good work!” 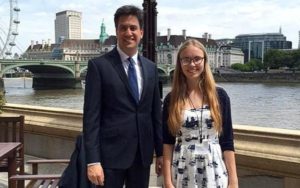