Earlier this month at Cardinal Newman we hosted our second ‘Human Library’! The event, which took place on Monday 16th April, was an opportunity for students to learn more about different people, experiences, conditions and more.

Last year’s event focused on people from a range of backgrounds, whereas this year visitors who gave up their time to act as ‘Human Books’ were all men working within the care profession.

The event was dubbed “Men Who Care” with a view to encouraging more men to go into the caring profession and allowed students to spend some time asking questions of our human books.

The range of professions included a Mental Health Nurse, Dementia Care Worker, Advanced Paramedic and the Manager of the Foxton Centre, which is charity organisation supporting communities and the homeless.

The Human Library concept is an international equalities movement, which promotes social contact and respectful conversation to challenge prejudice, exclusion and discrimination. It gave students the chance to ask frank questions and receive honest answers directly from people who they wouldn’t normally get the chance to interact with.

The event was organised by the Health and Social Care department and was praised by staff and students alike as being a really fantastic idea and a great way to learn more about people who are different to themselves.

As part of this event, we also were lucky enough to receive a visit from an A & E Consultant, Ayman Jundi, who gave up his time to talk to our students about his experiences on the frontline of the NHS. Students who attended all had an interest in potentially pursuing a career within the medical profession, so his invaluable insight into working in A & E was extremely important. Ayman also told the students about his tireless efforts as the founding member of the Syria Relief charity which is heavily involved in humanitarian and relief work in his native Syria. 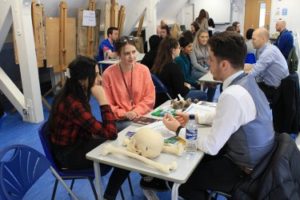