Students at Cardinal Newman College are being given the chance to put their questions to the local candidates ahead of this years’ general election.

Representatives for all the major parties standing for election in Preston will be coming into the college for Q & A sessions over a two week period, in the run up to the general election. Organised by the student union, candidates for the Conservatives, Labour, The Green Party, Liberal Democrats and UKIP will attend sessions across the college’s lunch time period.

So far students have put James Barker (UKIP) and Richard Holden (Conservatives) to the test with questions about their party’s policies, plans for the future and grilled them about some of the hot topics affecting students today.
In the next week we are welcoming Mark Hendrick (Labour), Gemma Christie (Green) and John Potter (Liberal Democrat Candidate for South Ribble). We are anticipating an equally good turnout for the upcoming Q & As with students getting their tough questions at the ready!

Jack Wareing (Garstang Academy), President of the Students’ Union said: “We believe it was imperative to organize these events; due to low turnout, specifically among young people, at previous general elections. At such a formative election, I think it is imperative to get young people interested and involved in the political process.
“We attempted to raise voter registration among Cardinal Newman’s student body and by inviting the candidates, make our students feel that they have a real impact on their local politics. Their vote does make a difference, and we wanted to show them this.” 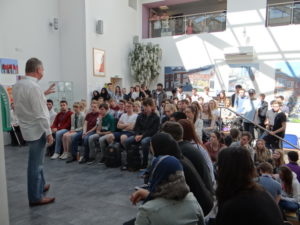