Making a Difference with the NCS

Newman student Benjamin Wareing has been selected from over 80,000 participants to become one of only 100 NCS National Leaders.

Benjamin, formerly of Ashton High School, who is studying A Levels in Economics, English Combined, Government & Politics and Sociology, joined the National Citizen Service (NCS) in August this year with a view to expanding his horizons and to challenge himself to change for the better.

NCS is a way for 15-17 year olds living in England and Northern Ireland to fast track their future by gaining skills for both work and life in general, those all-important skills that employers are looking for, such as team working, leadership and confidence.

It is made up of four phases, consisting of a stay at an outdoor activity centre, a residential trip where participants will stay in university style accommodation, a social action project within the local community and finally graduation from the project.

During the half term, Ben spent five days on a residential trip in London with 99 other NCS National Leaders, which involved meeting with politicians and big names from the world of business. The group took part in a whole host of activities, talks and workshops including being part of a “Big Debate”.

Benjamin (pictured right with NCS CEO, Michael Lynas) said: “I am so thrilled to have been given this once in a lifetime opportunity to represent the very best of this years’ NCS participants. I am looking forward to representing the North West, specifically Lancashire and definitely Preston!” 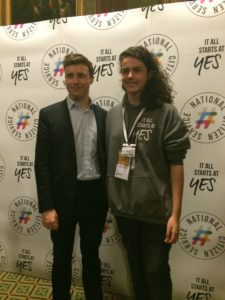