At the end of term, students studying Level 2 BTEC in Sport organised and took part in a charity football tournament at the College, to raise money for heart disease and CRY (Cardiac Risk in the Young).
Six teams took part in the 5-a-side tournament, which saw each team pitted against each other. The event was well attended, with many friends and classmates cheering them on from the mezzanine above! All the entry fees were donated to the charity, which is close to the heart of the Sports department, after the tragic death of student, Jordan Grant in 2012 from an undiagnosed heart condition.
Following Jordan’s death, his parents John and Lisa, set up a memorial fund at C-R-Y to raise funds in Jordan’s name, to not only raise awareness of his condition, but also raise funds for the screening of young people in the local area, to try and prevent similar tragedies happening.
The Sport Department at Cardinal Newman regularly arrange similar events at the College to raise money for CRY in memory of Jordan and to hopefully help to save the lives of other young people with undiagnosed conditions. 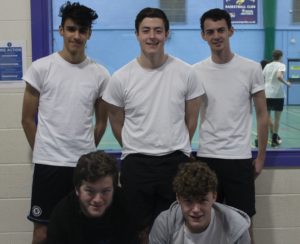