Cardinal Newman College student, Kelsey Lester will be performing in a West End Show over the Easter period. Kelsey, who studies, BTECs in Musical Theatre and Dance, alongside A Levels in Fine Art and Music, has landed herself a highly sought after role in the Youth Music Theatre’s latest production ‘Jabberwocky’.

Kelsey auditioned alongside over 1,000 other young hopefuls from across the length and breadth of the UK, to make it into the final cast as one of just 36 girls.

Based on the classic Lewis Carroll nonsense poem, this new musical adaptation combines an enchanting musical score by award-winning composer Rebecca Applin with storytelling by Susannah Pearse and sees two girls who are separated by more than a century come together through a chance meeting across time.

The Youth Music Theatre is the biggest of its kind in the UK, with a reputation for creating high quality new musical works and boasts a number of famous alumni including Ed Sheeran and Sam Smith. Jabberwocky will take place at The Other Palace Theatre in London’s West End between 5th – 14th April.

Details of shows and how you can get hold of tickets can be found at Youth Music Theatre UK. 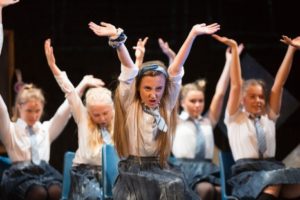