70 years ago, Joanna Millen was flown back to England after spending two years in a concentration camp during the Holocaust. At the start of this month, she came into Cardinal Newman to tell her story.

Religious Studies students got to hear what happened during the Holocaust as Joanna talked about her journey as a survivor and also explained more about what actually happened during World War Two.

As RS students study the Holocaust during their course, this was the perfect chance for them to gain more of an insight, especially with Joanna quizzing the students about the locations of the various concentration camps around the world.

Joanna, originally named Bela Rosenthal when she was born in Berlin in 1942, began her story by showing lots of different pictures of her family. Through the power of the internet, she had managed to meet up with some family members, who couldn’t believe she’d survived and told her everything about her family and parents, as well as giving her some pictures.

She then talked through her family history during the war and described how much her and her parents had suffered when their citizenship was revoked under the Nuremburg Laws. This saw them lose their money, their house and all their possessions. She also described how the Nazis made Jews wear yellow stars as a symbol of humiliation. These laws sought to make life as hard as possible for Jews in order to force them out of Germany – they had no access to transport and were forced to walk in the gutter.

Later on, she told students about the 1939 Census being introduced, which regarded someone as Jewish if they had one Jewish grandparent. “You were Jewish by blood”, she said. “There was no escaping it.”

The students listened to Joanna describing what life was like for her as a little girl in the concentration camp. She was one of 140,936 Jews deported to Theresienstadt, which sometimes saw up to 7x amount of Jews present than the camp was designed for. Joanna and her mother lived in awful conditions, hardly washing, sleeping in cramped conditions and surviving on a diet that had “the same amount of calories as a cheeseburger.” When Joanna told students “there was no way out of Theresienstadt except in death,” it was hard to understand just how she had survived.

Students were then even more shocked to find out that when she was 18 months old, her mother contracted tuberculosis due to the conditions in the camp, leaving Joanna as an orphan.

Joanna described how she formed a group with other orphans and some of the women working in the kitchens would bring them food. The group of children became so well known, that a study was carried out by a very famous psychoanalyst called Anna Freud. In 1945, Joanna and the orphans were liberated from the camp.

At the end of the talk, students had the chance to ask questions and you could tell they had really been moved by Joanna’s tale.

Afterward, Tony Leonard, RS teacher said: “We love having Joanna come in and speak to the RS students about her incredible story. She is a woman that has been through so much trauma, yet to come in and share her journey – it’s such an honour for all of us. She doesn’t just talk about facts and figures. She tells a real story.”

Joanna concluded her talk by urging students to speak out against racist and discriminatory opinions whenever they occur, reminding her of the famous words from Martin Niemöller:

“First they came for the Socialists, and I did not speak out—
Because I was not a Socialist.

Then they came for the Jews, and I did not speak out—
Because I was not a Jew.

Then they came for me—and there was no one left to speak for me.”

On behalf of everyone at Cardinal Newman College we would like to thank Joanna for giving up her time to talk to our students about her incredible story. 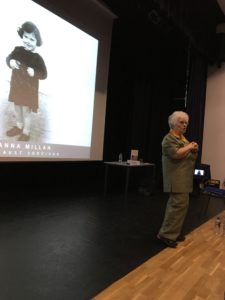