Cardinal Newman College student, Natasha Godsiff, has been awarded a most prestigious prize from Harvard University. Each year Harvard, which is one of the USA’s most prestigious Universities, chooses a number of institutions from around the world, to award their very best student a book on behalf of the university. The prize is awarded to students who are motivated, hard-working, excelling in their academic studies and who contribute to the College and wider community as a whole.

Selected from over 3,000 students at Cardinal Newman, Natasha was nominated by her English teacher who said: “I have found Natasha to be a student of the highest academic calibre. Every piece of work submitted has been a top A grade, and she has shown wonderful flair and literary awareness. It is rare to find a student as academically gifted as Natasha, especially one who is also so unfailingly modest about her own achievements. She is a model student who strives for the best, attendance, punctuality and meeting of deadlines have all been superb. Natasha is also unfailingly polite and pleasant, a real model student. I cannot think of a student more deserving of this prize.”

Not just a model student in her subject lessons, Natasha also regularly attends the HE+ scheme, a prestigious programme, run in conjunction with the University of Cambridge. This scheme is aimed at the most academically able students and offers the opportunity to receive additional support and guidance when applying to the UK’s top universities.

Natasha has also applied to the Sutton Trust programme, which is a scheme that enables students to access scholarships to study abroad at an American University. She has been shortlisted as one of only a few students for the programme out of candidates across the UK.

Not just an academically able student, Natasha also has a range of interests outside of College including reading, illustrating and playing the saxophone. She also took part in the NCS scheme which is a fantastic opportunity to broaden her horizons outside of the classroom.

This year’s prize for the Harvard Book Prize is a copy of “The Better Angels of our Nature: A History of Violence and Humanity” by Harvard Professor Steven Pinker. The book was described by Bill Gates as: “one of the most important books I’ve read – not just this year, but ever!” The edition has been inscribed with Natasha’s name and was presented by Cardinal Newman College Principal Nick Burnham. Nick said: “Natasha has proved herself to be a student of remarkable qualities. She is a credit to the College and I am sure this prize is just the start of many accolades to come in her future.” 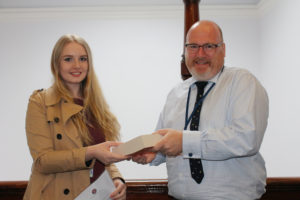