Cardinal Newman College student Robert McMullan was selected to take part in a work shadowing programme in Germany, as part of his studies of A-Level German.

Each year, the Friends of the Goethe Institut, London set up an opportunity for students to complete a work shadowing visit to Schwäbisch Hall during the October half term. The programme sees successful candidates shadowing in small to medium German companies over a period of five days. They also have access to a daily cultural programme, which not only allows participants to improve their language skills, but to deepen their knowledge and understanding of German culture.

Robert was selected as one of just 20 successful candidates out of over 200 applications, after submitting his essay in German in which he emphasised the reputation that Germany has for scientific research and how he hopes to take the opportunity to combine his science A-Levels with German.

Despite the experience originally being planned to take place in Germany, COVID restrictions meant that this year the opportunity was completely virtual. Robert said: “While this meant we no longer got to stay in Germany, we still got to take part in many exciting workshops, as well as listen to and speak with many interesting guest speakers from all walks of life, including university lecturers and students, an actress, an author, a programmer and a sound engineer. It was an amazing experience, where we all got to develop our German skills and also about learnt many things such as office etiquette in Germany,  the decline in interest in foreign languages as a whole across the UK, and also exciting new ways that German may be taught around the country -including the use of VR!”

After college, Robert is hoping to study Medicine at University and once he has finished his studies, he hopes to spend some time living in Germany – maybe even move there permanently! 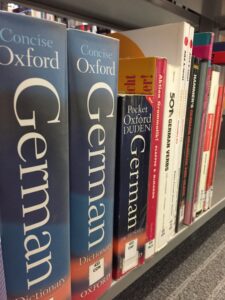