Students studying A Level German were offered the amazing chance to take part in a German Exchange with a school in Freiburg, South West Germany. The group of 16 headed out on Monday 20th March for a week long exchange visit with the school in Merian Schule. On their first day our students and staff were treated to a fantastic German style breakfast before spending the day with their exchange partners at school attending lessons.

Throughout the rest of the week the group were treated to a range of excursions across Germany, including a visit to Strasbourg, where they were able to wander around the city taking in all the main tourist attractions and landmarks. They also had the opportunity to visit the European Parliament, in Strasburg and were able to tour round the famous political landmark, even sitting in the Diplomats seats, where important Laws have been debated and passed.

The trip was the return leg of the exchange, after the German students visited us back in January. All the students had a fantastic experience, putting their language learning into practice and making great friends with their German counterparts! If you would like to see more of what the group got up to, check out the German Exchange Blog. 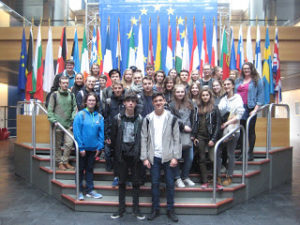