It has been an exciting week at Cardinal Newman, as the College welcomed candidates from the main five political parties ahead of the general election. Each day this week has seen a different candidate face an audience of students from the College to discuss their policies and their party’s plans for the future, before opening the floor up to questions from our eagerly awaiting students.

Monday saw Neil Darby from the Liberal Democrats take to the stage where he talked about the importance of the NHS and how “students are the future of this country”. He said: “When it comes to the general election, question everything, fact check it.”

On Tuesday we welcomed Tina Rothery from the Green Party who took the opportunity to talk to our students about Fracking and the impact that this will have on us as a big local issue, which is an issue that she has campaigned against for many years. She also discussed Brexit and the laws around drug use, specifically legalisation versus criminalisation of certain drugs. She faced questions on a range topics, including an interesting one from the former President of the Student Union, James Davies: “What if I choose to vote for a party but don’t necessarily agree with all of their policies?”

Wednesday was the turn of UKIP candidate Simon Platt, who received a grilling about his own and his party’s views on a range of current issues including Brexit and immigration. Our students asked questions about his thoughts on the economy and mass immigration.

The penultimate candidate for the week was Kevin Beaty from the Conservative Party. He discussed a wide range of issues including pensions and how he believes that “[the younger] generation will be paying for other people’s pensions and there needs to be a better way to deal with that.” He faced questions on many issues including the rise of homelessness in Preston and how young people are being scared away from university. There were also questions about the Tories policies on tackling extremism and cuts to mental healthcare in Preston.

Finally, Friday saw the turn of the local Labour candidate Mark Henrick. Mark started his session talking about some of the Conservative party’s policies and plans including many hotly contested issues, such as Brexit and the planned spending for the NHS under a Conservative Government. Students asked Mark questions about nuclear energy, rising taxes and whether the Labour Party should take some responsibility for the downfall of the NHS.

A positive message from all candidates throughout the week was the importance of good education and continuing to support and fund our education system. We hope that whoever wins the General Election will #SupportOurSixthFormers. Read the Sixth Form Colleges’ Associations manifesto here.

It has been a fantastic experience for the College and our students, as they have had a unique opportunity to have their voices heard and ask questions directly to the candidates themselves. We hope that the week’s visits have encouraged them to take an interest in politics, the future of our country and vote in the forthcoming election so that they can have their say in issues that will directly affect them.

Please see below for some highlights from the five debates.

“The problem with #Brexit is that we still don’t know what ‘leave’ means – and it’s a big problem”: @Neil4Preston #GE2017

“When it comes to the General Election, question everything. Fact check it. Students are the future of this country” – @Neil4Preston#GE2017

“As young people, politics is driving every little thing in your life – you need to vote” – @tinalouiseUK #GE2017

“We were split down the middle with #Brexit because we were fed lies. The decision we made to leave the EU was illformed” – @tinalouiseUK

“This election is about leadership. It’s about needing a strong and stable government” – @kevcow #GE2017

“Whichever government is elected, the NHS is going to be a nightmare and no one knows what the answer is” – @kevcow#GE2017

“We tripled the money going into the NHS and the performance was huge. The satisfaction rate since then has dropped like a stone” – #GE2017 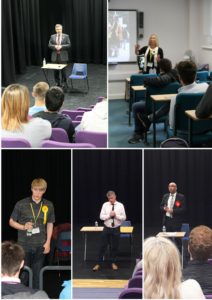