Another year and another Musical extravaganza, as Cardinal Newman Performing Arts Department take to the stage at Preston’s Guild Hall for their annual end of year show!

Written and directed by Performing Arts teacher Lee Johnson, ‘Fylde Under C’ is set in Blackpool in 1966 at the height of the Cold War. Local amateur spy Kenny Cole is convinced that there is a Soviet spy in his hometown, in his search to find the spy he encounters mods, rockers, factory girls, Communists and Conservatives!

The production includes over 100 students from the Performing Arts department, with live music played by the College’s Orchestra featuring the sounds of the 1960s, including music by The Beatles, The Who and The Kinks to name but a few.

You can catch the show at The Charter Theatre in Preston Guild Hall on Wednesday 29th March at 7.30pm and Thursday 30th March with a matinee at 1.30pm and the final performance at 7.30pm. Tickets start from just £11 and are available from the Guild Hall box office here: https://prestonguildhall.co.uk/shows/fylde-under-c/ 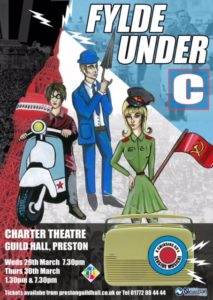