Richard gave up his time, along with other local young people, to act as a young volunteer for the club’s fun run at Leyland Leisure Centre. The event was part of a host of fund raising activities that aimed to raise money for Elliot Bland, an 8 year-old boy who suffers from a  rare genetic disorder called Angelman Syndrome (AS). Elliot attends Rainbow House once a week to receive specialist education and they are also working towards being able to help Elliot to walk. The money raised will go towards funding Elliot’s place at Rainbow House for the next year.

With the help of the young volunteers like Richard, who studies A Levels in Computing, Maths, Further Maths and Physics at Cardinal Newman, the fun run raised a fantastic £280. Added to the additional sums raised by the club, they have now raised a grand total of £1,600 which will ensure that Elliot can continue to attend Rainbow House for at least the next year.

Congratulations to all involved! 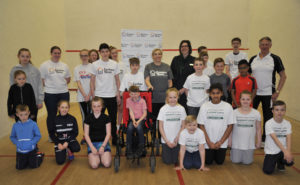