Cardinal Newman student Jack Durcan has been selected as part of team GB for the European Taekwondo Poomsae Championships.

Jack, who studies BTEC Sport at College will be heading to Rhodes in Greece, to take part in the competition, which will take place on 7th and 8th May 2017. Jack said: “This competition involves the best practitioners of Taekwondo from all over Europe coming together to compete against each other at the highest level. It’s a very prestigious competition and the qualification process was very difficult. There were three selection competitions that you had to attend before even being considered for selection and these were the French Open, Northern Ireland Open and British Nationals.”

Jack won two of the three competitions to secure his place at the European Championships and will now be competing in the Under 17 Individual Male category, which will involve sparring with an opponent to gain points, the winner is the contestant with the most points. Points are awarded for permitted, accurate, and powerful techniques delivered to the legal scoring areas.

Jack has been practising Taekwondo since he was 8 years old after seeing a demonstration at his primary school, which he thought looked really fun! Jack is a ‘Third Dan Black Belt’ and has been the British Champion for the last three years, having won a gold medal at the Commonwealth Games in 2014.

Jack currently trains between 20-25 hours per week, completing a mixture of flexibility, cardiovascular fitness, core stability, strength and conditioning and technical training. Talking about his training schedule and coaching team, Jack said: “I have a group of six national coaches dedicated to help the team with training for the Europeans and also my own instructor, who is a two-time world champion, so I feel that I have a great coaching team! I really enjoy Taekwondo and as far as my dreams for the future as concerned, I just want to stay fit and be able to continue to enjoy my Taekwondo for as long as possible and hopefully more opportunities to compete and represent my country will arise.” 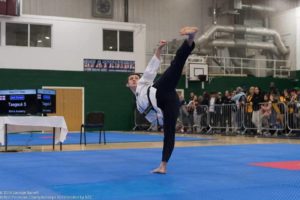