Cardinal Newman student Charlotte Bower has been selected as one of BBC Radio One’s Teen Heroes, which were presented on Sunday 22nd October at a star studded ceremony.

Charlotte joined Cardinal Newman from Penwortham Girls High School to study BTEC Art & Design. Having been placed into care at age 14, she was moved around between foster homes with four placements in just three years and was feeling like she didn’t matter.

Then she met someone from Barnardos, who came to her home to do a home placement inspection. She was really interested in the work that they did and how she could help other young people like her to have a voice and not have to suffer the same way that she did.

Charlotte has been instrumental in setting up a number of things during her time working with Barnardos, including getting a bill passed through parliament which ensures that care leavers have their Council Tax paid up until they are aged 25, which has helped to improve the lives of care leavers once they leave the care system. She was also involved with setting up a helpline for young people in care called Help at Hand. Help at Hand offers support, advice and information for young people within the care system from a dedicated team of professionals with the Children’s Commissioner’s Office.

Charlotte was shortlisted from 40,000 potential teen heroes to become one of just four young people to be named BBC Radio One’s Teen Heroes 2017! Hosted by Nick Grimshaw and Rita Ora and held at Wembley Arena as part of the Teen Awards, Charlotte was presented with her award by BBC Radio One’s Dev and Alice Levine amidst performances from international artists including Dua Lipa, Liam Payne, James Arthur and The Vamps. As she was presented with her award, the audience watched a video of Charlotte’ story and her trip to Radio One, where she was surprised by being able to meet many of her idols, including George Ezra.

Speaking with the Principal of Cardinal Newman, Charlotte talked about how grateful she is to the College for the support that she has received so far during her time with them and the opportunities that she has had.

To watch Charlotte receiving her award click here and view from around 17 minutes. 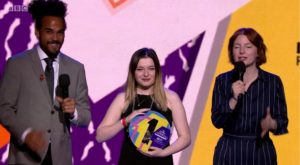