On Friday 23rd September Cardinal Newman celebrated the European day of languages! An annual event that is always celebrated by staff and students at the College, it is a great opportunity for all students and staff, not just the linguists, to discover more about Modern Foreign Languages.

A group of Year 13 language students attended Manchester University’s Languages Department for the day, to get a taste of what it might be like if they pursued a degree in languages after College.

Back at College, there was lots of fun in store with tasters of Portuguese and competitions being held throughout the day in the library, encouraging staff and students to test their linguistic ability. Books and DVDs were wrapped in brown paper and a blurb was written on each, in one of our Modern Foreign Languages, with prizes awarded for those who could correctly guess the film or book from the description! 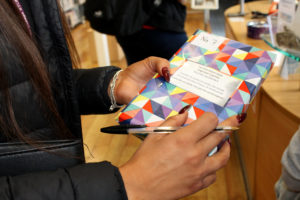