This week at Cardinal Newman we are celebrating 30 years of Drama at the College. It was back in 1987 when it was decided that drama should be re-launched at the College, which is when “Limelights” was formed by Pete Hartley who is now a Drama Teacher at the College. It started initially as an extra-curricular activity, but then became an umbrella structure for the productions from performance courses, such as Theatre Studies, Dance and Performing Arts. Thirty years on, the College has turned out over three hundred productions and is still going strong!

Well over two thousand students have studied one of the performance courses at Cardinal Newman College in the intervening years and while many went on to pursue unrelated professions, a significant number have trained as performance professionals both on and off stage and others have become teachers of performance. Some notable examples include Julie Atherton who left Newman in 1997, has now spent nearly twenty years in musical theatre, including lead roles in West End hits (Mama Mia and Avenue Q) and several national tours, while in more recent years, Andy Rush and Hannah Britland have been featured in prominent TV roles. 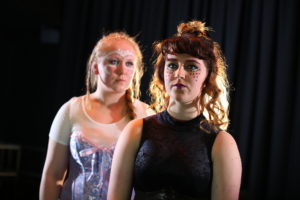