Students and staff from the Business Department were treated to a fantastic few days in the Capital last week. The students who are all studying Business Studies, Accounting or Economics were able to take in some of the most important sites in the City when they had a guided tour of ‘the City’, which is the financial and commercial heart of Britain. As part of this the group visited the Bank of England, to see the importance that it plays in the British economy and even got the chance to lift a bar of gold worth £400,000! As well a private tour of the bank, the walking tour took in the history of the district, including the many banks and insurance companies that are based there, not to mention taking in many of the district’s most famous landmarks, including the Lloyds building, the Gherkin, the Walkie Talkie and the Cheese Grater.

The three day trip also saw them pay a visit to Fullers Brewery, which is based along the Thames, where the group studied the production techniques, including their use of technology and how they have utilised CAM and robots in their business.

On the final day of this whistle-stop tour, the group went to the Museum of Brands, Packaging and Advertising. This fascinating exhibition enabled the group to examine the history of marketing all the way from the Victorian era right up until the present day, showing how advertising and marketing has developed through the ages and highlighting how businesses have affected social change.

Despite their jam-packed schedule, the group still managed to find time for some of the more traditional tourist attractions, including Buckingham Palace, Oxford Circus, Bond Street, Leicester Square, Covent Garden The Savoy Hotel and Westminster, to name a few! Finally, the group had just enough to end the trip with a spin on the London Eye, where they could take in the whole city from up high.

Back up in Preston, the group are now looking forward to putting what they have seen and experienced into practice as part of their studies at College. 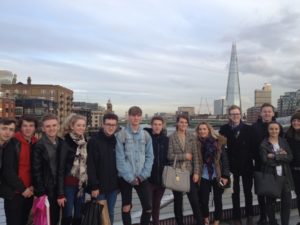