Congratulations are in order for Newman student Isaac Towers who won a bronze medal in the World Para Athletics Championships last night!

Isaac, who was representing Team GB in the T34 800m, which was broadcast live on Channel 4 on Thursday night, brought home the medal after completing the race in a fantastic 1:46:46!

Isaac, who has just completed his BTEC Extended Diploma in Business Studies at Cardinal Newman, has previously competed at the 2016 European Championships in Grosseto, Italy, where he achieved a Gold in the T34 800m and Silver for the 400m. He followed this up by travelling with Team GB to Rio, to compete in the Paralympics where he finished 5th in the Men’s T34 800m final!

Isaac is one of just 49 athletes representing Team GB at the event, which has been taking place at the London Stadium from 14th – 23rd July. As one of the youngest athletes representing the Great British squad, Isaac is certainly proving that he is one to watch as he develops his career in athletics.

After he returns from the Championships, Isaac will then hopefully take up a place at Loughborough University to study Management Sciences. Talking about his time at Cardinal Newman, Isaac said: “Coming to Newman was the best move I ever made! I have really enjoyed my course, there are fantastic teachers and everyone has been really accommodating when it comes to my needs and my sporting requirements. Newman certainly provides the basis for success!” 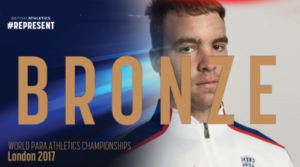