Former Newman student Sean Neighbour has been making his mark since he started University in September. After achieving ABB in his A Levels at Cardinal Newman, in English Literature, Religious Studies and History, Sean started a degree in Modern History at Lancaster University. Making the move to University is a challenge for any student, but it was an even harder transition for Sean to make as he has Autism, which can make change and new social experiences an extra challenge. But Sean has really flourished at University, and become a spokesperson for the Autistic community.

Sean decided to set up a group in order to raise money as part of Autism Awareness Week, following the success of his work on Campus, he was contacted by the Lancaster University Students’ Union, inviting him to run for a role within the Union, representing the disabled community on campus.

Sean’s aim is that the group can be a place for people with Autism to come together as well as act as a way to inform other people who may not know much about Autism. Sean is hoping to arrange for guest speakers to come to the University to speak as part of his grand plans for the group. 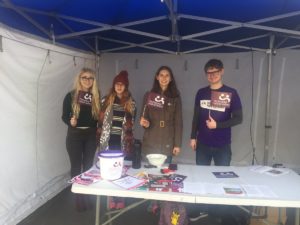