Jacob had previously been a rugby player with Sale Sharks until the age of 14 and then a triathlete, before he really got into distance running. He has only completed one season of competitions, but he is already making a name for himself, having won the British Championships in his first race.

Now Jacob says he feels privileged to be travelling the world with his sport, attending training camps and competitions across Europe, Africa and Asia! He will be heading to South Africa for a month in April with World Athletics and is hoping to qualify for the Euros, which take place in January. His recent success at the European Cross Country Championships in Turin, Italy, earned him a place at the iconic Liverpool Cross Challenge which saw him come 4th in the U20s category. This has now secured him a place on team GB!

Jacob, who studies BTEC Diploma in Sport and BTEC Extended Certificate in Applied Psychology at Newman, has been smashing his targets and is fast becoming one to watch in major athletics tournaments. He runs a mixture of 3, 5 and 10K races, with his 8.19 minute 3k placing him as 7th in Europe. He has now also been offered a Sports Scholarship to study at Oklahoma State University, which is well known for its sporting prowess. The favourites to win nationals, a prize which in turn wins millions of dollars for the university, they are always on the look out for future stars on the track and field.

Jacob said: “I had a few offers from American universities, but I really felt like Oklahoma State was the right place for me. I will have the chance to train alongside the best in the world and have great opportunities, but it also felt like I was part of a family.”
As well as his amazing opportunity to study in the US, Jacob has also been offered a lucrative Nike deal, as part of the scholarship, which will see him kitted out in all of the latest running gear, as well as being able to take part in testing new kit for the brand.
The next big race that Jacob is looking forward to is a Boxing Day outing in the Ribble Valley 10K, where he will be in the elite category competing against the likes of Johnny Brownlee! Best of luck Jacob, we are so proud of you! 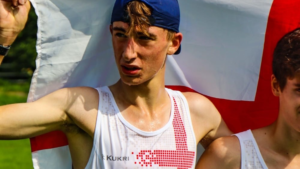