A former Cardinal Newman student has been getting creative to help raise funds for the NHS by after being inspired by Colonel Tom Moore.

Sarah Robinson, who is now 23, has created two original pieces of artwork, inspired by the lockdown, which she is auctioning off in a bid to add to the total raised by Colonel Tom. One is a portrait of Colonel Tom himself and the other is a contemporary drawing of two lovers in lockdown called ‘Quanankiss’.

The former Newman student, studied BTEC Art & Design alongside A-Levels in Textiles and Business Studies, then went on to study our Foundation Art & Design Foundation Diploma for one year, before heading off to Manchester Metropolitan, where she has just graduated with a first class honours in Fashion.

After seeing Colonel Tom’s inspirational challenge and the incredible amount of money he was able to raise, Sarah felt inspired to do something to help the cause. “I have been truly inspired by Colonel Tom and his pure determination and willingness to help the NHS who are doing such an incredible job.

“With a sister working on the frontline in ITU and a mum who is busy dealing with NHS patients in the community, I am seeing first-hand the hard work staff are putting in and wanted to do my bit to help them and support Captain Tom in his fundraising.”

Both pieces are mounted and are available for bids until the end of them month, when all the money raised will be donated to Colonel Tom’s Just Giving Page. If you would like more information, or want to bid on either of the pieces, details of the auction can be found here >>

Congratulations on such wonderful artwork and a wonderful idea! It just goes to show that the Newman spirit lives on in our students, long after they leave us. 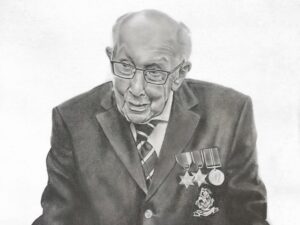