The project, which also included Dance students from UCLan, aimed to animate the exhibitions and to respond to the Architecture of the Harris Museum itself.

The piece was site specific as it had been specially choreographed by Josh Hawkins from Hawk Dance Theatre to fit the space, using the circular structure of the first floor balcony to shape how the dance was constructed and performed.

The dancers created poses and statue like tableaus echoing the stances in The Alexander Frieze, which covers the ground floor walls of the Museum. Josh worked with the Academy for several weeks before the performance to ensure that the piece was perfect for the occasion. Students were also able to rehearse in the Harris Museum prior to the show.

The piece was performed in a ‘pop-up’ style which added to the entertainment value as members of the public were surprised when our students suddenly burst into motion.

Overall, it was a fabulous experience for our Dance Academy and hugely successful with all those who were lucky enough to see it! 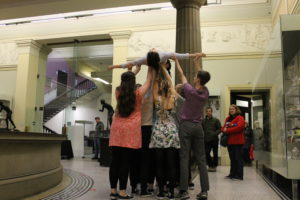